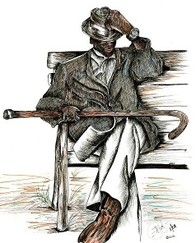 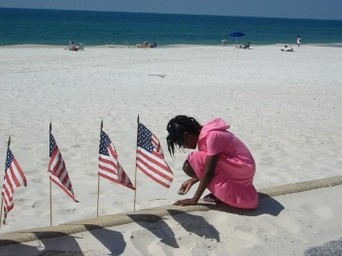 Rosamond Johnson Beach Gulf Islands National Seashore
Johnson Beach is located on the eastern end of Perdido Key.  Named for Rosamond Johnson, Jr., a man of courage, valor and honor, was killed on July 26, 1950 during the Korean War.  Army Private Rosamond Johnson, Jr. was the first Escambia County resident to die in the Korean War on July 26, 1950. He had successfully carried two wounded soldiers to safety and was returning with a third when he was fatally wounded. He joined the military at age 15 and died at 17. He posthumously received the Purple Heart August 21, 1950 and several veteran groups are still working to seek additional military honors for this deserving hero. The Sunset Riding Club, Inc. club leased the land in 1950 from the county for the sole use of bathing, beach and recreational facilities for "colored citizens." Although the lease was cancelled, in 1956 the name Rosamond Johnson Beach remained. The area became part of Gulf Islands National Seashore May 8, 1973.  A permanent monument in Johnson's honor was erected at Johnson Beach on June 10, 1996. Front Gate 850-492-7278. Johnson Beach, (850) 934-2600.

Fort Barrancas, Pensacola Naval Air Station
Fort Barrancas was built on the site of numerous previous forts, including, Fort San Carlos de Austria, built in 1698 and destroyed in 1719.  The site was used as a harbor fortification by the British and the Spanish captured Pensacola in 1781 and completed the fort.  The fort was constructed mostly with skilled slave labor whose craftsmanship is admired by all visitors. Scheduled tours of Fort Barrancas are daily at 2:00 p.m. and at the Advanced Redoubt every Saturday at 11:00 a.m. Fort Barrancas and the visitor center is open March-October at 9:30 a.m. to 4:45 p.m. and November-February at 8:30 a.m. to 3:45 p.m. Please call 850-455-5167 for more information.

Barrancas National Cemetery, Pensacola Naval Air Station
The area has been used as a burial ground since the construction of Fort Barrancas. In 1838 it was established as a United States Navy cemetery. During the Civil War, Pensacola was hotly contested, as it was considered to be the best port for access to the Gulf of Mexico. Numerous soldiers on both sides were interred in the cemetery after falling in combat, or dying in nearby hospitals. Records indicate the following information on the burial of U.S. Colored Troops -- known: 154, unknown: 98.  After the war, in 1868, Barrancas was officially made a National Cemetery and many others nearby makeshift burial grounds were disinterred and relocated to Barrancas.

Good Hope AME Church
The church was officially founded in 1852, although members say it began earlier as a nondenominational church. It has always been in the Warrington area. Its original location was at Barrancas Avenue and Gulf Beach Highway.  Church maintains a small history museum in fellowship hall.

First Baptist Church of Warrington
The church was organized on December, 11, 1933 by a small group of women, several of whom were descendents of black land owners and residents on the land now occupied by Naval Air Station Pensacola.  Church services were originally held in a “Bush Arbor”, a shelter made of cane poles and leaves on the corner of Harris Street and Gulf Beach Highway. First service was held on the first Sunday in January 1934.  The Bush Arbor served as the church building until October 1934.  A photograph of the Bush Arbor, dated October 21, 1934 can be seen on a commemorative plaque located on the cornerstone of the church’s fellowship hall. 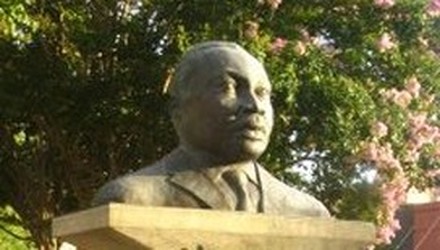 Martin Luther King, Jr., Plaza
The Martin Luther King, Jr. Plaza is located on median at Palafox and Garden streets. The plaza commemorates the contributions of Dr. King and is the perfect centerpiece downtown, whether for the summer farmer’s market, to watch various parades or just to take a moment to reflect.

Blue Dot Barbecue
The Blue Dot Barbecue is located at 310 N. DeVilliers Street, (850) 432-0644. This legendary, no-frills burger joint offers one of the best hamburgers in the region.  Their hamburgers are routinely voted as the best hamburger in Pensacola.  The restaurant is nationally acclaimed and has been written about in various publications, including ‘Southern Living Magazine’. The restaurant has been located in the historic neighborhood for nearly seventy years. The Belmont DeVilliers neighborhood was a Melting Pot for music, food and entertainment during the early 20th century. The district currently is undergoing revitalization.

Gumbo Gallery
The Gumbo Gallery is a cultural heritage tourism attraction that is located at 314 N. De Villiers Street. Gumbo Gallery is the leading gallery in preserving the culture and history of the "Forgotten Communities" of Pensacola. Don’t miss this delightful gallery of eclectic multi-cultural art from Artist/Owner Sonja Griffin Evans and other colorful local artists.  A must see location for all tourists. Phone: 850-912-6806.

Zion Talbot Chapel
Zion Talbot Chapel, 525 W. Jackson St. Founded in 1880, the original building was destroyed by fire. The present building, constructed in 1918, houses one of the first pipe organs found in Pensacola. 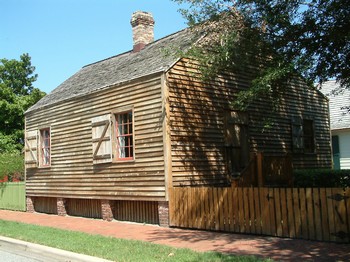 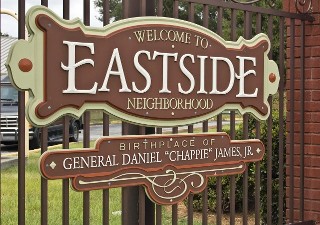 H&O Restaurant
H&O Restaurant 301 E. Gonzalez, (850) 432-1991. This restaurant has served traditional Southern dishes since the 1930s and was a focal point for the black community before integration. Wealthy businessman Tierce Lee and wife Hattie were the original owners of this property, in partnership with brother Hamp and wife Ola.  The restaurant became famous hot spot during the ownership of the Grier family.

General Daniel “Chappie” James, Jr. Home and Memorial Gardens
Located at 1606 and 1608 Martin Luther King Boulevard. This is the birthplace of the Air Force’s and America’s first African American four star general.  His mother Lillie
had a private school for black children in the house, where a large majority of black professionals obtained their education.

Dr. John Lee Pickens Medical Office
407 East Gonzalez Street; Dr. Pickens was an African American pharmacist, physician and coroner.  Known for his love of community and support of its people in the community.

Dr. E.S. Cobb Home
601 E. Jordan Street, A physician trained Meharry Medical School and the University of Leon in France during World War I.  Noted as a medical pioneer in Pensacola.

Spencer Bibbs School
2005 North 6th Avenue.  Named after Pensacola’s first black Supervisor of Colored Schools.  He petitioned the school to construct a school of the eastside, so students would not be required to walk to a school on the Westside of Pensacola to be educated.

Hollice T. Williams Park
I-110 Interstate Corridor (East Blount and Haynes Street) is named after the first Black person elected to a public office in Pensacola during the last century. 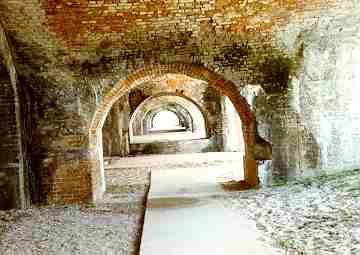 Fort Pickens
Fort Pickens is located on the western portion of Pensacola Beach, (850) 934-2600. Because Pensacola had relatively little agriculture, slaves did not have traditional Southern plantation experiences. Instead, West Florida slave owners rented out their slaves to work in construction trades or as longshoremen on the waterfront. For example, the U.S. Army rented slaves to build forts such as the 19th century masonry walls and earthworks at Fort Pickens. During the Civil War, African-American troops occupied Fort Pickens while Confederate troops held Fort Barrancas on Santa Rosa Island.

Century
Alger-Sullivan Historical Society
Century is a small town in Escambia County, north of Pensacola that was once known as Teaspoon before the American Revolution.  Teaspoon was a settlement of free African Americans, who traded on the old Conecuh River.  The community is located on Highway 29, near Interstate 65. Learn about the history of Teaspoon and how it affected blacks and slaves, and about the old sawmill in the community museum.  The society is located on Fourth Street at Houston Park, in the City of Century, Florida.    Call 850) 256-2029, (850) 256-3980 for more information.

Learn more about Pensacola’s and Florida’s Cultural Heritage in the following e-Magazines: